This is an online marks percentage calculator, which can be used to measure the percentage of marks obtained in an examination. One is to enter the marks that they have scored along with the total marks to find their percentage in the examination.

This Exam Marks Percentage Calculator is useful for school students and college students so that they may keep track of the overall percentage scores. Percentage is the number expressed as a fraction of 100. So let's start, How to find the percentage of marks? With example: 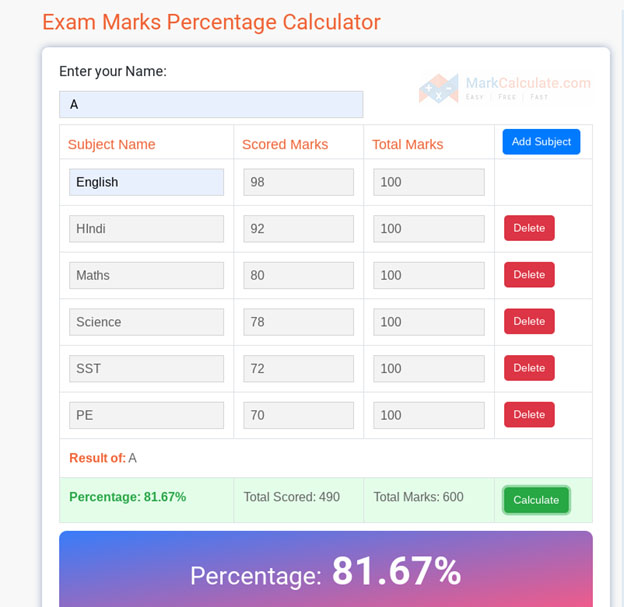 The majority of students are asked how to figure out their exam grade %. Here is the response to this query, along with an illustration. You can calculate the percentage of marks in two easy steps. As follows:

Step 1: Multiply the final score by the test's maximum score.

How to Calculate a Number's Percentage

The percentage can be calculated in three easy steps. As follows:

Determine the number's original form, such as a fraction or decimal, in step one. The original format will provide the next mathematical operation that will be performed on the number. Let's say the estimated ratio of the data we are comparing is 0.25 in decimal form, while an example of a fraction is 4/15.

How to Calculate percentage of marks?

A percentage is a number that is expressed as a fraction of 100. Here the calculation percentage is explained. In order to find the percentage of the marks, we divide the total scores with marks obtained in the examination and then multiply the result with 100.

The Percentage Formula is given as,

The notion of percentage is used so that one can measure the tendency of value with respect to the original value. This has a huge application in businesses while they compute their profit and loss percentage. Percentage defines the ratio of any value to a whole value multiplied by 100. Percentage is denoted by “%”

How to calculate the Percentage of a Number?

Generally, the numbers that are to be converted into percentage are given in two formats.

By using this percentage formula, it becomes easy to know how to calculate the percentage of marks, discount etc.

Suppose there are 150 students in class 10th. 75 of them are boys. Find the percentage of boys in the class 10th?

How can we calculate the percentage of marks obtained?

A percentage is a number that is shown in terms of 100.To find the percentage of the marks obtained, one shall divide the total scores by marks obtained and then multiply the result with 100.

How to calculate percentage of 12th class marks? or

how to calculate percentage of marks of 10th class

The following formula will help you to calculate your marks obtained in class 10th or 12th.

If you happen to have an additional subject then you must add that subject also as the 6th subject and then calculate the percentage for 6 subjects.

How many marks make one percentage?

In order to calculate the percentage for any marks you need to know the total marks. Therefore, if the paper we are speaking is equivalent to 100 marks overall then your 1% of the total marks will be
= 1 % of 100 marks
=1 / 100 X 100 = 1 mark
Note that if the value of total marks changes then the value of its 1 % will also change accordingly.

How do you calculate average marks?

The average test score obtained is the sum of all the scores divided by the number of test-takers.
For example: suppose 3 students took a test and received scores of 69, 87, and 92,

Teachers and many specialists may use this average method to monitor the rate at which the class is learning the material. Teachers also use this method to estimate how a student's scores, and then place them in accordingly to the rest of the class. This plays an important role especially for students with learning disabilities.

How to calculate SSC percentage?

Just like how we calculated the marks percentage above, the similar method has to be used here. To find the percentage, we shall divide the total scores with the marks obtained and then multiply the result with 100.
Percentage of Overall Scored Marks = (Scored marks /Out of marks)×100

Example:
A student scored 175 out of 200. Find his Exam Marks Percentage

While comparing quantities and marks , the easiest way to do so is to convert all the figures into one common unit. Percentage happens to be the perfect fit here because all quantities can be converted into percentage and comparing becomes much easy and practical. Let’s take an example to understand this topic better.

Solution: as we can see here, the quantities are different and there is no other way to compare them other than converting them into percentage.

We can easily see that the store B had more sales than store A.

What is the Difference between Percentage & Fraction?

Percentage and fractions are very closely related but have a major difference. A fraction is when a 2 units are divided and a resultant represents a part of the whole. Meanwhile, percentage is when the fraction is multiplied by 100.

While every effort has been done in developing this calculator, we are not accountable for any incidental or consequential damages arising from the use of the calculator tools on our web site. These tools serve to visitors as a free calculator tool. Please use at your own risk. The calculations provided are just a guide. You are advised to speak to a professional financial advisor before taking any financial decision.